October was always “peak season” at Lenox’s Osceola House for others, but original owners Edward and Sarah Livingston would be at their French country house “Villa Clermont” in the Pyrenees, conditioning their horses for the fox-hunting season.

This is just some of the fascinating knowledge that historian Cornelia Brooke Gilder and local craftsman Steve Baum will impart at a benefit lecture hosted by present owners Ernie and Jo Faraci in the mansion’s elegant reception rooms on Saturday, October 19 at 3:30 pm.  The event titled “October at Osceola House” will include the visual presentation as well as seasonal refreshments, benefiting the restoration and educational programs of Ventfort Hall Mansion and Gilded Age Museum.

Boston architects Rotch and Tilden designed Osceola House for the Livingstons in 1889, shortly before beginning their biggest Lenox project, Ventfort Hall. Both were among the five Lenox “cottages” designed by the firm, all of which are extant.

Over the thirty-year period that the Livingstons owned Osceola House, it was frequently rented, and these long-term tenants, often their friends, were active in Lenox’s social life. Gilder will recount untold stories of Gilded Age romances, festive parties, sudden deaths and financial ruin which occurred in the mansion.

Baum, long experienced in Rotch and Tilden’s architecture through his extensive work at Ventfort Hall, will focus on the recent restoration work at Osceola House which he directed, bringing it back to the splendor of the Livingstons’ day.

Tickets for the Osceola House benefit event are $75.  Reservations are highly recommended as seating is limited.  For information or reservations call us at 413-637-3206.  Osceola House is located at 25 Cliffwood Street in Lenox.

The Comical Mystery Tour ensemble returns to the mansion with and encore performance of “Murder Is in the Stars” and invites the public to join the fun on Saturday, October 19th. Doors open at 5:00 pm. Program starts and first course served at 5:30 pm.

Lady Lydia the psychic, has called together a group of millionaires offering the gift of eternal life for the small sum of 5 million dollars. Some believe it is totally legit, but someone decides her life shouldn’t be eternal and drops the final curtain on her. Was it Big Bosco, the “Family” man, or Governor Bill Fold? It couldn’t be a politician, could it? I mean they are all so honest. How about Candy Cotton, the adult film star trying to make it big in legit movies or might it have been Gaylord Gabby, the fashion designer from the left coast. If Lydia were still alive she could tell you for sure. Wait a minute; if she is a real psychic, she would have known it was coming wouldn’t she? Come along and join us for another fun filled night of mystery and help figure out who offs Lady Lydia.

Cost to attend is $40 per person including a full course dinner. A cash bar is available for beer and wine. Reservations are required by Wednesday, Oct. 16th. Seating is limited.  For reservations call us at 413-637-3206.

October brings many different activities — jumping in leaves, apple picking, trick-or-treating, and not to mention…pumpkin painting! Join us as we prepare for Halloween by painting pumpkins here at the mansion.  While pumpkins dry, there will be opportunities to have some spooky snacks and craft other autumnal decorations.

Drop in at any point and wear your painting clothes! Cost to attend is $7 per child with advance reservation; $10 per child day-of (adults free with their child). Reservations are highly recommended as seating is limited. Call us at (413) 637-3206 to reserve your child’s spot.

Archduke Dr. Geza von Habsburg will return to the mansion to give a visual presentation on “Sisi, the Tragic Empress: A Great-Great Grandson’s Perspective.”  This is the story of the beautiful Empress Elisabeth, wife of Emperor Franz Joseph I of the Austro-Hungarian Empire.

“I am so fond of the Emperor! If only he were not an emperor!”  Elisabeth is said to have expressed these feelings when she learned of Franz Joseph’s desire to marry her.  Clearly she sensed that life as empress at the Viennese imperial court would not suit her personality.

A member of the Wittelsbach family of Bavaria, Elisabeth came from a rather informal household, entering at the age of sixteen into the restrictive formal life at court and the overly rigid supervision of Sophie, her mother-in-law.  Franz Joseph on the other hand had been groomed from childhood for his future role of emperor (he came to the throne in 1848), and often showed no understanding for the needs and fears of his somewhat shy wife.

After giving birth to three children, Elisabeth within the first years of their marriage took refuge in travel.  Considered one of the great beauties of the 19th century, she was extremely vain of her slender figure, observing strict diets, exercising constantly, unusual for her time, and exhausting her ladies-in-waiting with long hours spent riding or walking.

Tragedy struck in her later years when the couple’s only son, Crown Prince Rudolf, took his own life at Mayerling, some say due the lack of understanding, even from his father, of his desire to modernize the multiethnic empire’s complex political system.  In 1898, Elisabeth was assassinated during a holiday in Switzerland, dying at the hands of an Italian anarchist.

Franz Joseph continued to reign until he died in 1916 in the midst of World War I.

Dr. von Habsburg began his career as Chairman, Switzerland of Christie, Manson & Woods Auctioneers, overseeing offices throughout Europe. In 1980 he became Chairman of European Operations for the company.  Later, he served as Chairman, New York and Geneva, of Habsburg Fine Arts International Auctioneers.  In both companies, he specialized in silver and gold, objects of vertu and Russian art.  In 1994, he joined Fabergé Co. as a consultant, spokesman and lecturer worldwide.

Dr. von Habsburg is considered one of the foremost experts on Faberge, the former court jeweler to the Russian Tsars and the subject he covered in 2016 at Ventfort Hall.  He has organized and curated exhibitions worldwide, including Fabergé in America, which toured five cities and attracted 400,000 visitors to the Metropolitan Museum of Art.

Fluent in seven languages, the speaker has authored several books and was also an associate professor at The New York School of Interior Design, The Bard Graduate Center for Studies in the Decorative Arts and New York University. He has lectured for over ten years at the Met.

Tickets for the event are $55 per person. RSVP by Monday, October 21st.  Reservations are required as seating is limited.  For reservations call us at 413-637-3206.

Join David Raby for a paranormal investigation of the historic and haunted Ventfort Hall.  A non-fiction author and paranormal investigator, Raby has always been intrigued by history. He undauntedly enters haunted locations that would terrify others with hopes of contacting lingering spirits to discover why they remain.

Raby is the author of four published books and countless online articles. With his passion for the paranormal field, he has accumulated over a decade of experience, founded a paranormal group and has helped many people (and spirits) that ranged between the curious and those seeking urgent advice.

His interest in the paranormal was shaped by the fact that spirits seem to be attracted to his compassion and openness. He has a knack for storytelling that fuels his intensive historical research and fact finding.

He believes that by bringing people’s stories out of the shadows and into the light of our awareness, they may find eternal rest and peace.

The event will begin at 7:00 p.m. and conclude at midnight. Tickets for this exciting event are $35 per person; reduced rate of $20 for ages 12 – 18 and 19-23 with student ID. All of the proceeds from ticket sales will go towards the preservation and restoration of Ventfort Hall. Call us at (413) 637-3206 for reservations. 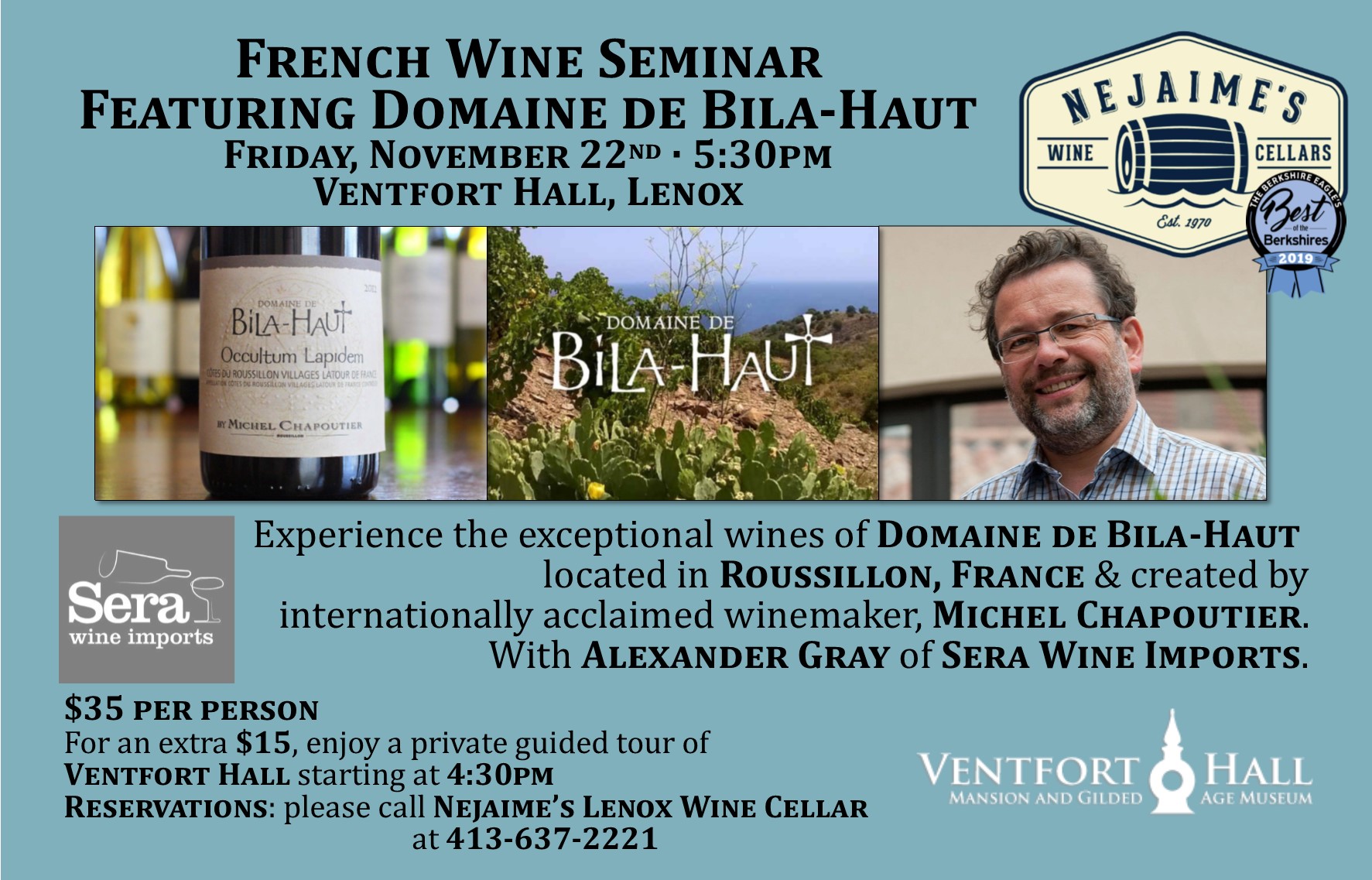 The Comical Mystery Tour ensemble presents their new holiday program “Grandma Got Runned Over by a…Oh Dear!!!!” and invites the public to join the fun on Saturday, November 23rd. Doors open at 5:00 pm. Program starts and first course served at 5:30 pm.

Sandy Klawes has invited the family to a get together with his wife Marguerite Freagan Klawes at their compound in  Northpole Springs Tennessee. Of course, their Granddaughter, Sue Ellen will be there and Cousin Terry the Stable Guy. A surprise guest, cousin Elvira Jean will be there too. She hasn’t been to one of these in years. It is your typical Family get together with Road Kill Casserole and Grandpa’s “special” beverage in his mason jars hidden in the cellar. Believe it or not, someone doesn’t get along with everyone and someone ends the season celebrating permanently. Come along and help figure out who dunnit.

Cost to attend is $42 per person including a full course dinner. A cash bar is available for beer and wine. Reservations are required by Wednesday, Nov. 20th. Seating is limited.  For information or reservations call us at 413-637-3s206.

Ventfort Hall will be closed on Thanksgiving Day so our staff and volunteers can enjoy the holiday with their family and friends.

Known to Ventfort Hall Mansion and Gilded Age Museum audiences for her many one-woman shows (remember the provocative Paris 1890?), actress Anne Undeland returns to celebrate the release of an audiobook adaptation of Louisa May Alcott’s Little Women from which she will read excerpts on Saturday, November 30 at 3:30 pm.

Following the reading, Anne and Alison Larkin, founder of Alison Larkin Presents, the Berkshire-based audiobook company that is issuing Little Woman, will discuss Alcott’s early feminist roots, her links to Massachusetts and Little Women then and now.  A Victorian tea will then be offered.

The new audio production gives the listener the March sisters, rough-and-tumble Jo, graceful Meg, gifted Beth and willful Amy, in one evanescent year, from Christmas to Christmas, as they move from childhood to adulthood in Civil War New England. Anne will give a colorful rendition of the four sisters.

Anne has been featured in numerous radio productions for BBC Radio, the Australian Broadcasting Corporation and NPR affiliates in the US.  Alison is also a writer and comedienne. Alison Larkin Presents has won seven AudioFile Earphones awards for excellence.

Tickets for the Little Women reading and succeeding tea are $28 per person for advance reservations, $32 for day of the reading.  Reservations are recommended as seating is limited.  For reservations call usl at 413-637-3206.

Jul
27
Tue
4:00 pm Tuesday Talk at Ventfort Hall an...
Tuesday Talk at Ventfort Hall an...
Jul 27 @ 4:00 pm – 5:00 pm
Known in the rarefied world of Egyptology as Mr. Mummy, Bob Brier returns to the mansion with a visual presentation titled “The Murder of Tutankhamen.”  To be seen also via...
Jul
31
Sat
8:30 am Drop in Community Yoga Saturdays...
Drop in Community Yoga Saturdays...
Jul 31 @ 8:30 am – 9:30 am
Join Susan Shook, a yoga practitioner, at an all level yoga class here at the mansion on Saturdays from 9 am to 10 am. The class is indoors in our...
Aug
3
Tue
4:00 pm Tuesday Talk on Zoom – “America’...
Tuesday Talk on Zoom – “America’...
Aug 3 @ 4:00 pm – 5:00 pm
Architect, author and historian Gary Lawrance will give a visual presentation on “America’s Riviera: Gilded Age Houses & Gardens of the Hamptons” on Zoom. Lawrance will give his talk based...
Aug
6
Fri
10:30 am Play – Nutshell Playhouse Perfor...
Play – Nutshell Playhouse Perfor...
Aug 6 @ 10:30 am
Self-described kooky Commander-in-Chief Don Jordan of the Nutshell Playhouse will bring his troupe to appear in an original production here at the mansion. The program is appropriate for children of...
View Calendar