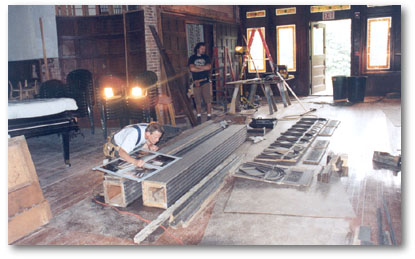 In the summer of 1998 Miramax made arrangements to use the exterior of the Ventfort Hall mansion as the orphanage for the film adaptation of the John Irving novel Cider House Rules. Lenox, together with Northampton, Massacusetts, New Hampshire, and Maine was a brief home to the creation of this Oscar-winning film.

With Tobey Maguire as the orphan Homer Wells, Michael Caine as Dr. Wilbur Larch, Charlize Theron as Candy, Ventfort Hall became St. Cloud’s Orphanage under the direction of Lasse Holstrom. David Gropman was the production designer and his crew of carpenters, landscape workers and electricians took over the property in August 1998 to prepare for the filming.

Ventfort Hall benefited from their activities. The film replaced the ugly safety glass in the porch door with a beautiful stained glass window that matches the old ones on either side. The rotting porch columns and missing railings were rebuilt with new wood and then painted and aged to match the original weather stained and weather-beaten porch. When, during a summer rainstorm, it was discovered that the porch roof leaked like a sieve, carpenters were sent immediately to rebuild the roof.

Finally, on a cold November day, hundreds of massive trucks arrived. Filming had begun. Snow was manufactured one day. Two days later it was washed away and green grass and summer flowers sprouted all over the garden. Trees came and went as they were needed to screen unwanted views… Lights burned deep into the night… What a great adventure! Three weeks later it was all a memory. The movie was released to great acclaim in 2000.

The movie The Cider House Rules is out on video. This Oscar-winning film features the mansion as “St. Cloud’s Orphanage” in the John Irving Story. The acting is great! Wonderful music.VHA is thrilled to have been a part of this fine film. The video and CD are available for purchase in the Ventfort Hall Gift Shop. 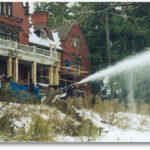 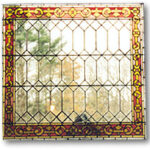 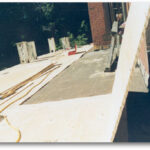 South Porch being re roofed by movie crew 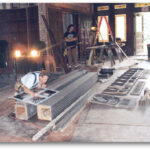 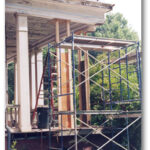