Restoration – Diary of the Conservation 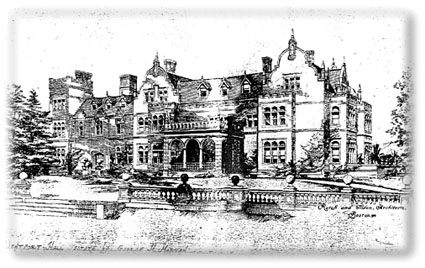 The above image is An Architects Rendering – February 17, 1894. Published in American Architect and Building News. Courtesy of Providence Library. 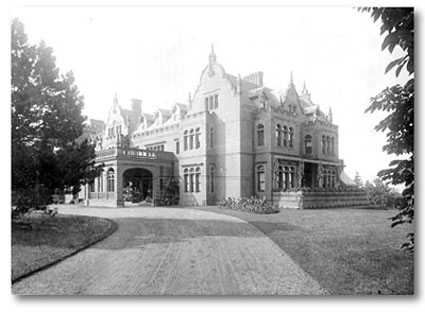 On June 13, 1997, with the encouragement and support of the Massachusetts Historical Commission, who listed Ventfort Hall among the 11 most endangered properties of Massachusetts, and with the help of many private donations and loans and a 5 year loan from the National Trust for Historic Preservation, Ventfort Hall Association, Inc. (VHA) was able to purchase Ventfort Hall for $500,000.

In 1993 the complex was accepted for listing on the National Register of Historic Places. The property consists of 11.7 acres. Besides the 28,000 sq. ft. mansion, it includes the original Carriage House and the walled garden. Two additional gatehouses, one on Walker Street and the other on Kemble Street are now privately owned and have escaped the deterioration of neglect and vandalism. The original parcel was much larger. Much of the frontage on both roads has been sold off over the years and Ventfort Hall is now surrounded by many private homes built since 1947. The Morgans also owned the land across Walker Street that is now the site of an apartment complex, Morgan Manor, which extends from Walker Street to Housatonic Street. 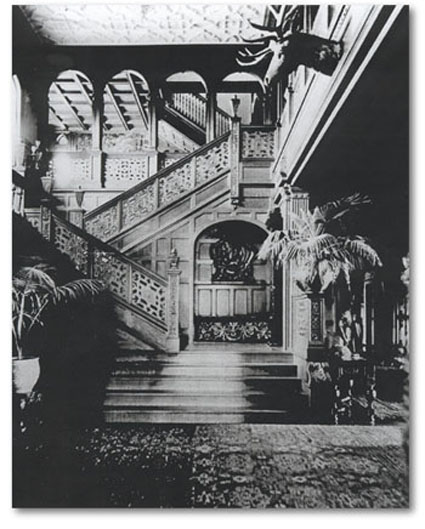 The interior of the mansion is the most remarkable and elaborate interior in this area. No money was spared in the construction of the magnificent staircase and gallery. The Great Hall is two stories tall at one end with a complete plaster ceiling with pendants in the style of seventeenth century Scotland. The Long Hall is flanked with fluted columns and paneling and also has an elaborate plaster ceiling.

The Great Hall approximate date 1894. Courtesy of the Lenox Library.

Unfortunately much of the paneling in the reception rooms was removed by the previous owner in preparation to demolition. We are fortunate that, with the exception of a few choice missing pieces, most of it lies on the premises, but it is a very challenging puzzle to put it back. VHA focused on opening this central area to the public. In December, 2000, with the generous help of supporters like you, we opened our doors for our first public tours of the Great Hall.

The brilliant colors of stained glass echo the reds, greens and yellows of the fall leaves which were as much appreciated in those times as they are in ours. The Billiard Room has stained glass windows on three sides.

It will be a slow process to restore all of these spaces to their original beauty. But even today they dazzle us with what is still there.

The basement was the workroom for the house. Ice boxes and walk-in coolers remain from that period. Storage shelves, wine cellars, massive cedar closets… Corridors behind the scenes… Secret doorways… A bowling alley…

We began by concentrating on the ground floor restoration. As of June 2001, we have been able to open the Great Hall, Dining Room, Morning Room, Butler’s Pantry, and part of the Long Hall for use and tours by the public. We installed a new electric line, a new water line, drainage, a new gas line… Very boring and expensive but most necessary…

VHA chose the firm of John G. Waite Associates, Inc. as architects for the work on the interior. They have extensive experience with restoration and VHA is very fortunate that they can work with us. 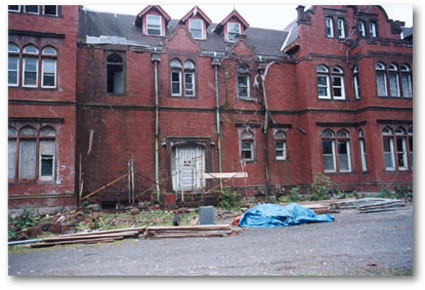 1. The North wall in original condition. Note the missing gable which allowed the penetration of water and ice which extensively damaged the wall and the interior in this area. 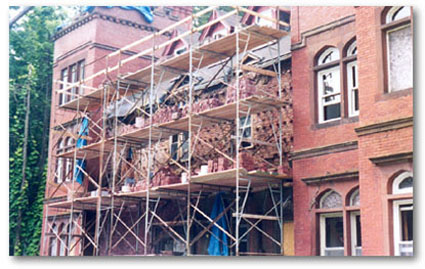 2. Work in progress. All the face brick was removed, cleaned and re-laid. In several areas the original masons had skimped on the back brick. This left dangerous weak points which have now been filled and properly rebuilt.

Ventfort Hall Association received a $50,000 grant from the Massachusetts Preservation Projects Emergency Fund which is under the chairmanship of William Francis Galvin, Secretary of the Commonwealth of Massachusetts. As soon as the architectural and engineering studies were completed masonry work began on the north wall. All the veneer brick was taken down cleaned and reinstalled. The brick on the Ventfort Hall mansion was hand struck and very dense and so far it has not been possible to find an exact match. Every face brick has to be cleaned and reused. The wall is four inches thick and some of the interior brick was badly damaged and even missing.

This area was completed and it is now stronger than it ever was. The roof behind the three decorative gables was reshingled and flashed. One area of rotten roof rafters was repaired. The gutter system was restored using the original gutter boxes. The windows have been reinstalled.

In addition to the $50,000 granted by the state, VHA spent another $30,000 made available by large and small private donations by the time this wall was finished. With VHA’s hard-working volunteer Board of Directors it was possible to spend almost all the money raised for construction. Administrative costs have been kept to an absolute minimum. 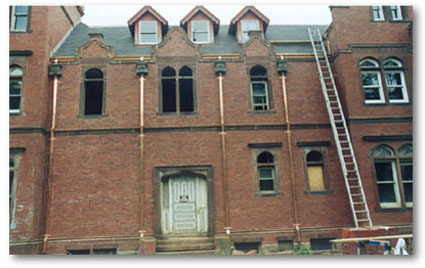 3. The finished wall. Another hidden challenge in this restoration was to match the very dark red color of the original mortar so that the new work would blend with the original. 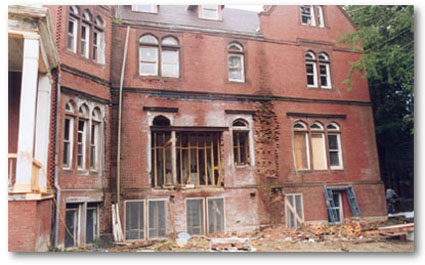 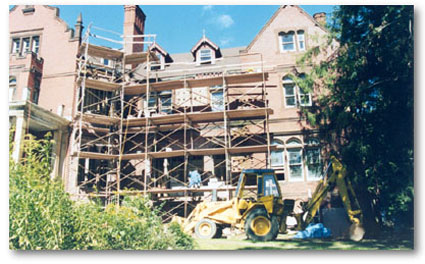 An additional grant of $100,000 from the Massachusetts Preservation Projects Fund made it possible to begin work on the most precarious portion of the walls on the southern face of the building.

This area was weakened by the fact that around 1950 part of this wall was removed and a cheap wooden structure was built to house an upstairs kitchen. This was badly deteriorated and, in July of 1998, it was removed.

When the mansion was built, the original gutter system was built on top of the brick wall. Aesthetically this was very handsome. However, over the years it became the weak point which gave way in the face of the tough New England weather. In some areas this configuration was changed many years ago. However much of the roof edge remains as originally built. Due to lack of maintenance the gutters wore through and the water they collected went directly into the masonry wall and destroyed the bond between the face brick and the structural layers beneath. In addition, we found that the original masonry contractors must have been very rushed. In some areas the back brick is very poorly laid and filled with holes which compromise its structural strength.

The diagonal wall of the dining room was the first area to be rebuilt. All the face brick and much of the wall behind it was removed and rebuilt. 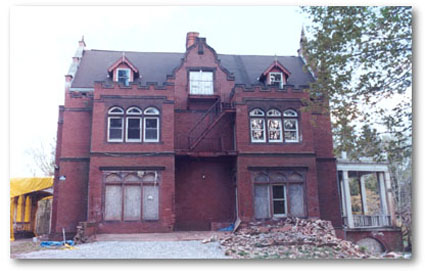 The next area that will have to be rebuilt is that of the West Wall where the same water damage has occurred over the years from neglected gutter work on top of the masonry wall. We have temporarily replaced some of these gutters. However, in bad icy and rainy winter weather, water still penetrates this wall and collects on the interior. It has been determined that $225,000 must be raised to complete this area. 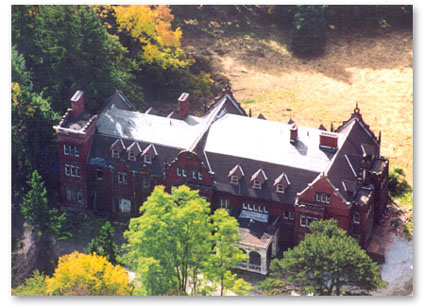 Preserve – the work of restoration and repair

Immediately after the purchase, Ventfort Hall Association, Inc. began to repair the massive roof of the mansion and to study the structure and plan for the repair of the areas of exterior brickwork which were collapsing due to severe damage by water and ice.

Private donations paid for the repair of most of the roof. Today, even in the most treacherous weather, Ventfort Hall remains almost dry inside. This is quite a contrast with February of 1997 when the Board of Directors of VHA was first allowed to visit the interior. At that time there was ice covering much of the floor in the main rooms of the mansion. 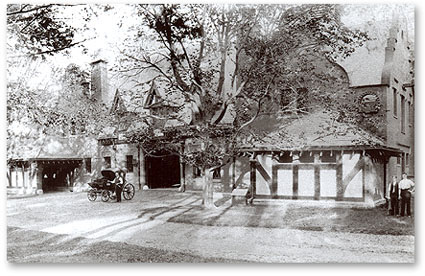 Hidden in the woods at the far end of the property is a romantic gabled Carriage House.

Of course it needs serious repair. A few patches were made in the roof and stabilizing columns were installed to support the main beams of the interior. More funds are needed to rebuild the exterior brick work and to properly repair the roof and the interior. At this time a huge orange tarp is all the protection that we can afford. But we have great plans… The National Trust for Historic preservation has given us a small grant to help with the architectural and engineering work.

The large Carriage Room is ideal for a permanent exhibition. VHA is undertaking a study to determine how to install historic archival and exhibit space in this building. This will be a very valuable use for this building. There is so much historical material still available in the Berkshires which needs to be properly stored and catalogued so that it can be made accessible for study.